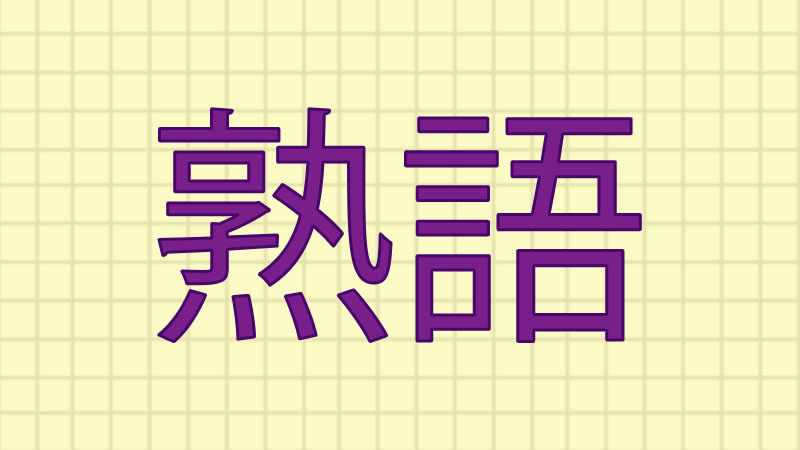 A detailed study about the kanji script and its origin has been written in Kanji Story and Kanji Story 2. In this post my objective is to categorize the jukugo or kanji compound words into five main types.

How are kanji used in Japanese writing system?

Japanese language can be solely written in hiragana or katakana, but kanji are also an integral part of the Japanese writing system. Most words in Japanese can be written by using kanji, be it verbs, nouns, prepositions, adjectives or adverbs; except topic markers like は、が and を. For example,

Verb and adjective words have okurigana (the words that end in hiragana), because they are used in conjugation with respect to the context of the sentence. On the other hand, nouns are written in kanji, there can be a single kanji word or compound kanji words (jukugo) made of two or more kanji. However, nouns that are formed from verbs or adjectives have hiragana endings; like 厚さ ( あつさ heat).


1. Kanji having the same meaning (同義) – two or more kanji forming a word are synonymous to each other or have similar meaning. For example,

3. Jukugo or Compound Kanji words which indicate an action (Verb+Noun) – when the compound kanji word (jukugo) like, 読書 (どくしょ reading) is broken down into two words i.e. 読む(よむ) meaning to read and 書 (ショ) meaning a book, a relationship between the two can be established by forming a sentence like, 書を読む to read a book.

Similarly, 帰国 (きこく return to one’s own county) are made of two words; 帰る (かえる) meaning to return and 国 (くに) meaning country. A relationship can be established between the two words by forming a sentence like, 国へ帰る returning to country.

4. Jukugo or Compound Kanji words which define an object or thing – the jukugo 缶詰 (かんづめ canned) is made up of two words i.e. 缶 (かん can) and 詰める (づめる to stuff). When 缶 and 詰める are combined together, they form a word which indicate an ‘object that is packaged or canned’.

The word 人工 (じんこう artificial/man-made) can be analyzed in a similar way. 人 (ひと) means a man and 工 (こう) means craft. The two words 人 and 工 are combined together to form a word that means ‘crafted by man’ or ‘artificial‘.

5. Jukugo or Compound Kanji words belonging to the same group – words like 夫婦 (ふうふ husband and wife) and 姉妹 (しまい sisters) are formed by two nouns that belong to the same category. Another fine example is 土日 (どうにち Saturday and Sunday). 土曜日(Saturday) and 日曜日(Sunday) are clubbed together to form a single word which means ‘Saturday and Sunday’.