The annual International Language Fest at Bangalore University, took place on 1st February 2015, at the Jnana Jyothi Auditorium. With seven foreign language departments of the university taking part in various cultural events, the fest was worth a visit.

Its been a long time that I participate in any event and this was my CHANCE!

I took part in the Japanese quiz contest which was held in each class, and to my surprise I won (^o^) . 久しぶりに優勝しました。 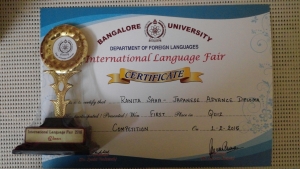 Moreover, I was always keen on learning Japanese traditional performing arts, so I took this opportunity to showcase my dancing skills. I took initiative to choreographed a Japanese dance (日本舞踊), by learning from various videos available on the Internet. Since I don’t even have a basic training of Japanese dance, I was really missing a teacher. It took me around three weeks to put the steps together and finish the choreography. The music that I used was Shourinka’s Bad apple, the traditional version of a very popular Japanese song from Touhou (game).

I performed the same dance on the Japan Habba, will be putting up the photos and video on a separate post.

Though I consider myself a very lousy singer, I was very enthusiastic to sing “Ashita ga Aru sa”. There was nothing to worry, it was chorus.