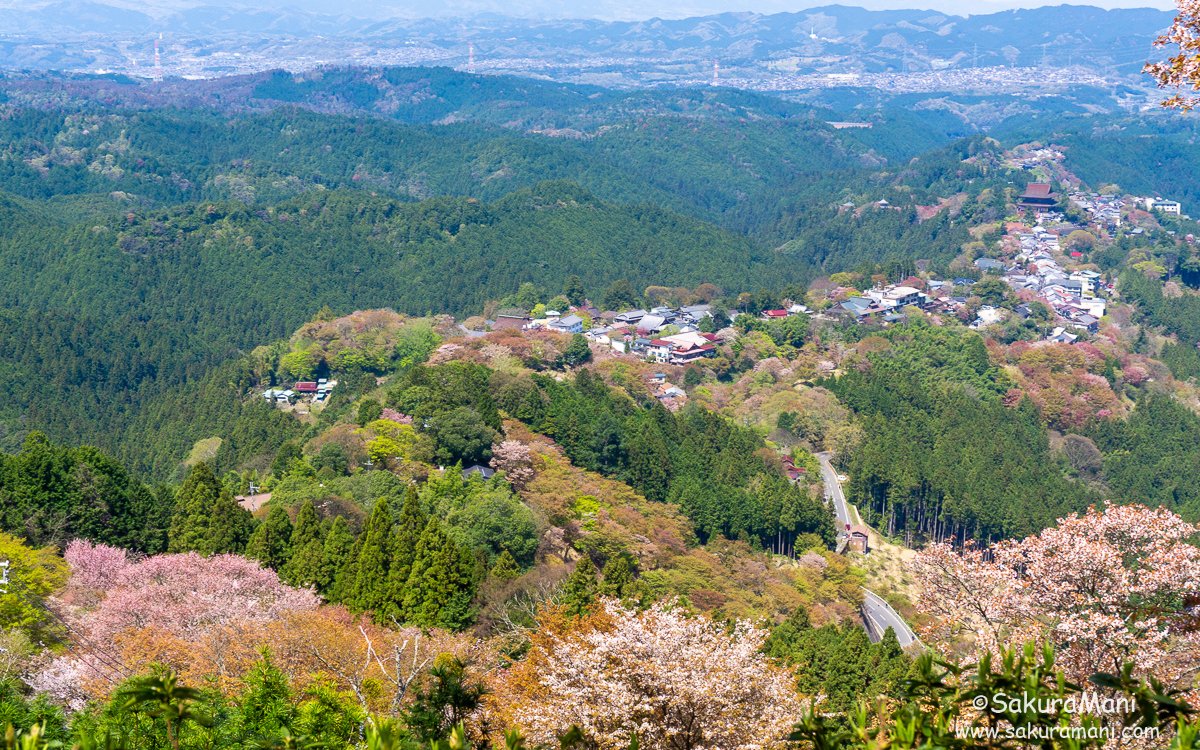 Mount Yoshino offers splendid views of cherry blossoms during spring. It is one of the most popular hanami 花見 (flower viewing) spots in Japan.

In April 2016, on a lovely sunny day I went on a solo hike to mount Yoshino to experience senbonzakura 千本桜 (thousands of cherry trees). Although I kept a regular track of the weather and cherry blossom forecast, it seemed like I was a bit early since some of the sakura buds were yet to blossom. On top of that, the heavy shower on the previous day might have caused some of the flowers to fall off. At first I was a little disappointed but nature can be unpredictable and so we should always embrace its beauty without prejudice.

I must admit, those six hours I spent climbing up and down mount Yoshino will always be one of my favorite memories of Japan. Overlooking the fact that I was in a considerably remote part of Nara with an unstable network connectivity (in some areas of the mountain) and no company, Yoshino did not fail to impress me with its endless ranges covered in soft pink blanket of sakura.

Mount Yoshino is situated roughly 43 km south of Nara city. It falls in the Yoshino disctrict located in the center of Nara prefecture. I took the Yamatoji Rapid train from JR Nara station to Tennoji station and then changed to Kintetsu line to reach Yoshino Station. As it was a peak season I started early to avoid the crowd.

There were hardly four others waiting for the ticket counter to open at Senbonguchi station. The counter opened a few minutes before the first ride. I bought a one-way ticket which cost me 360 yen.

Mount Yoshino spans across an area of 8 km and is about 690m tall. It is the starting point of Omine Okugakemichi sacred path and also a part of Kii Peninsula pilgrimage route along with Mount Omine and Kumano area. Mt. Yoshino was designated as a UNESCO World Heritage Site in 2004.

The mountain is well connected by roads making it easy for pedestrians and people travelling by car to explore different areas at their own pace. There are over thirty thousand cherry trees of two hundred different varieties in Mt. Yoshino.

The ropeway car from Senbonguchi Station will drop you off at the starting point of Shimosenbon. This mountain is filled with temples, shrines and natural attractions but I could not visit all that was there on the map. I got so lost in the enchanting vastness of Yoshino that I just kept going where the trail led me to.

I made my first stop at Kanenotorii 金の鳥居 (copper gate) called Hosshin-mon 発心門. It is one of the oldest Torii gates in Japan. It is said that this gate was built with the copper that remained after sculpting Tōdaiji Daibutsu 東大寺大仏. However, over the years this gate was destroyed twice and then rebuilt. It is still considered as a very important landmark, especially by Shugendō Buddhist pilgrims. It is a gateway to reach enlightenment through ascetic training in the sacred mountains.

A few meters from Hosshin-mon lies the prime temple in Yoshino – Kinpusen-ji 金峯山寺. It is one of the most important temples of Shugendō doctrine.

The Zaodo main hall is dedicated to Zao Gongen (a mountain deity and also the manifestation of Buddha).

In the same temple complex there is a small temple hall called Aizendō dedicated to Aizen myoo the deity love and one of the four wisdom kings.

According to Kojiki 古事記 (Chronicles of Japan), Buddhism was introduced to Japan in 552 CE during the Asuka period. It was clear that Buddha was different from the Shinto gods and goddesses. Hence, the Japanese invented a concept called Shinbutsu Shugo 「神仏習合」, in which Buddhism and Shinto could coexist in harmony. Similarly, Shugendo doctrine also incorporates the idea of Buddhism co-existing with ancient mountain religious practices.

Next I arrived at the Yoshimizu shrine which is just few steps from Kinpusen-ji temple.

The shrine’s main gate was closed. I guess I reached there before opening hours.

At this point I had already entered the Nakasenbon 中千本 area and there are some spectacular views from up here.

I kept walking until I reached the Nakasenbon bus stop. To save some energy I took the bus from here straight up to Okusenbon.

I passed through the torii further up and came across a slightly elevated ground. The view of Okusenbon 奥千本 from here was breathtaking. I spent some time here just looking at the endless stretch of mountain ranges.

Kinpu shrine 金峯神社 is dedicated to the local deity of Mt. Yoshino.

This hiking trail was quite narrow but what I loved about it was the silence and the magnificently tall cedar trees.

Walking through the cedar forest I could hear chirping of birds. The sweet smell of cedar woods was so relaxing that it added on to my spirit. I was not tired even a little and was looking forward to explore more.

As I moved close to Saigyouan 西行庵 I saw rows of sakura trees. Okusenbon 奥千本 looks truly beautiful from here.

Saigyō Hōshi’s was born in Kyoto and his real name was Satō Norikiyo. He traveled across the western mountains of Yoshino, Mt. Koya and also lived in Saga for a long time. The pseudonym Saigyō means ‘towards west’.

In some of his poems Saigyō Hōshi has praised Yoshino’s beautiful cherry blossoms.

I was now ready to head back and explore the Kamisenbon 上千本 area.

As I kept going, I observed that this side of the mountain was barren. They had probably cleared down this area to plant more cherry trees.

Mt. Takagiyama Observatory seemed more like a resting place. I took a few minutes break in here. I still had a long way to go.

Once I felt recharged, I was ready to continue hiking.

Near to the Mt. Takagiyama Observatory 高城山展望台 I came across a bronze statue of Akai fudōmyō 閼伽井不動明王, a protective deity and one of the Wisdom Kings.

Close to Kamisenbon area there is a simple yet elegant shrine called Yoshinomikumari-jinja 吉野水分神社. This Shrine is dedicated to  Ame-o-Mikumari no Kami, a female Shinto deity associated with water and child birth.

Unlike many other shinto shrines, the Haiden (prayer hall) of Yoshinomikumari-jinja 吉野水分神社 looked more open and bright from inside.

This is probably the most popular point for photographers. You can see as far as the Shimosenbon 下千本 area from here. The sakura trees in full bloom creates a meandering pattern through the green canopy. To me the pattern looked similar to the shape of Amanohashidate 天橋立 (a sandbar covered with pine trees in North Kyoto).

The building with a large red roof at the far end is Kinpusen-ji 金峯山寺 temple. I wish I had a long camera lens!

As I walked further downhill I entered the Kamisenbon 上千本 area. This area was pretty crowded as many gathered here to celebrate hanami 花見.

Looks like there are initiatives taken by the locals to plant new sakura trees and protect the Kamisenbon 上千本 area.

I kept walking further down a slope which was densely populated with sakura trees. Not all the trees were of the same variety. You can simply understand that by looking at the color and shape of the flowers.

Nyorin-ji 如意輪寺 is 2.6 km from Kamisenbon main area. I took the driveway and kept going until I reached a point approximately 800 meters from the temple. I was stopped by a spectacular scenery of takizakura groves. At this moment I actually felt like my experience of senbonsakura 千本桜 was successful.

After five more minutes I entered a path through the forest and finally reached Nyorin-ji 如意輪寺 which was my final stop in Yoshino. It is said that this temple was built under Emperor Godaigo’s patronage.

The enshrined deity here is Nankiri-Fudoson (難切不動尊 ) – the immovable one.

By this time I was worn out but I still had to walk for hour to reach Yoshino station.

Instead of returning to the main hiking trail through Mt. Yoshino I took an outer bypass road.

I took a breather once I was back in Shimosenbon 下千本 area. Before catching my train back to Nara I did a quick souvenir shopping.

Yoshino is not only about cherry blossoms, it looks incredible in fall too. Next time I would love to visit Yoshino to experience colorful autumn foliage (momiji).